Thank you for your participation in the reception of SSTV images transmitted from the International Space Station on 11 - 14 April 2019 to celebrate the Cosmonautics Day. I am sending you your award in the attachment.

In the picture on the diploma one may see:
Yuri Gagarin – the first human in outer space. On 12th of April 1961 he made a first orbital spaceflight around the Earth in space-vehicle Vostok. Making a single lap took him 108 minutes. To commemorate this event, Cosmonautics Day is celebrated.

Crew of the space mission: John Young and Robert Crippen. First flight of the Space Shuttle Columbia began on 12th of April 1981, what is 20 years after first human spaceflight. NASA’s space-shuttles were used for next 30 years. In July 2011 Christopher Ferguson, Douglas Hurley, Sandra Magnus i Rex Walheim went to the last mission at the board of Space Shuttle Atlantis – STS-135

Alexei Leonov – the first human to conduct extravehicular activity (EVA), exiting the capsule during the Voskhod 2 mission for a 12-minute spacewalk. Leonov was also a participant of Soyuz-Apollo mission in 1975.

Ulf Merbold – first ESA astronaut in Space. He made his spaceflight at the board of Space Shuttle Columbia – STS-9 in the period of 28th of November till 8th of December 1983.

Valentina Tereshkova – the first woman to have flown in space. She began her spaceflight on 16th of June 1963 at the board of Voskhod 6. It took 2 days 22 hours 50 minutes and 8 seconds.

Neil Armstrong – Apollo 11 mission commander. The first person to walk on the Moon. Spoke the now-famous words, "That's one small step for a man, one giant leap for mankind“. This year we celebrate 50th anniversary of this event.

Above the astronauts and cosmonauts one may see: Soyuz-Apollo orbital complex (1975), first artificial satellite Sputnik 1 (1957), then space probe Voyager 1 – currently furthest from Earth man-made object. It was launched in 1977. It moves at speed 17,024 km/s, in the distance of 20 billion kilometers from Earth. The radio signal from the probe needs 18 hours to reach Earth.

On the right of the picture one may see Soyuz TMA-19M docked at the ISS. The russian spacevehicles are currently basic means of transport of people and goods onboard the ISS after the withdrawal from service US space ferries.

Below the photo of Yuri Gagarin there is a logo of Southwest State University in Kursk (Russia). It is one of the best russian universities which is going to celebrate 50th anniversary of origin soon. Students of this university, future engineers, built „Tanusha“ satellites and participated in other space experiments.

SSTV transmissions from the International Space Station are possible thank to involvment of many people – ARISS volunteers from around the world. 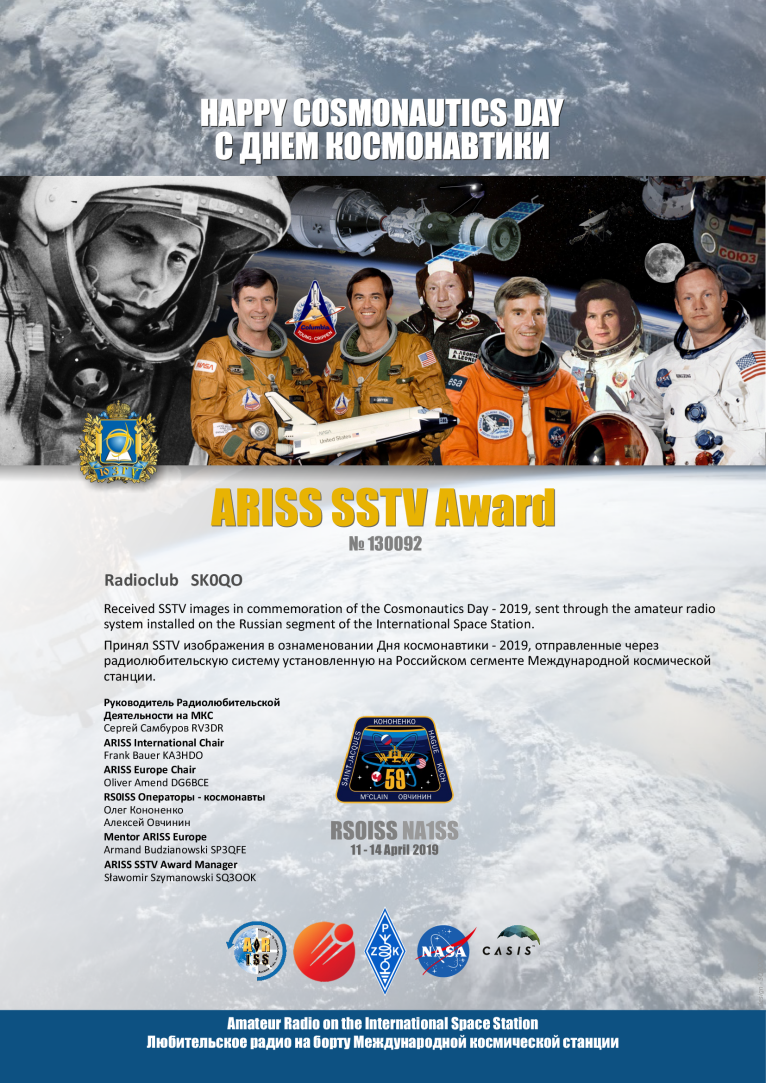